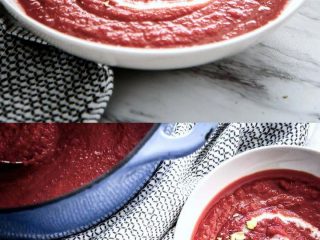 Did you love or hate beets as a child? I absolutely hated them, could not stand them. Fortunately for me my parents were also not fans of the root and thus we rarely ate them. When I was forced to encounter them on my plate they usually came soft and cold from the can which, as you can imagine, was not appetizing to a vegetable-averse child.

But like many foods that children despise, I am now a reformed beet-loving adult (see also: brussels sprouts, turnips, parsnips, and broccoli). Whether it’s the rainbow colors of chiogga, the slight sweetness of golden, or the stain-inducing earthiness of red, I’m all about beets.

So when I found myself in possession of a large amount of beets after receiving my Imperfect Produce box recently, I knew they had to make their way into a soup. And what better way to show off the flavors of late fall and early winter by combining sweet red beets with the tartness of green apples and the savory flavor of celery and fresh herbs in this Red Beet Apple Soup 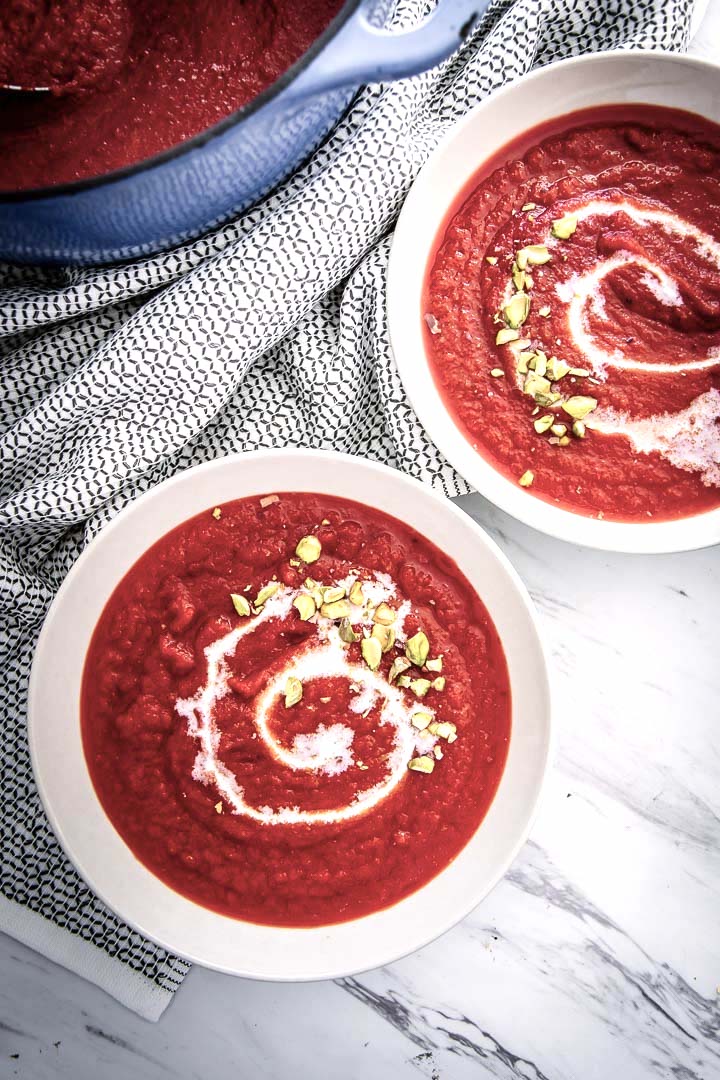 This Red Beet Apple Soup was a complete accident that turned into a major hit. I have cooked with beets a few times before but am in no way an expert, so I’m still experimenting with the roots and finding the best ways to prepare and the best flavor combinations.

That’s what I love about cooking, you are able to play around in the kitchen to master and make an ingredient you’re own.

My earlier experimentation led to the delicious Smoked Golden Beet Carpaccio Salad, which is still one of my favorite recent creations. I started cooking and testing recipes first with golden beets because their flavor is a bit more mild than their red counterparts – and they have propensity for creating a larger kitchen mess (hello beet fingers!).

Basically golden beets are the “starter beet” and I was ready to move on to the big leagues.

Red beets, and beets in general, are usually in season from late summer until late fall.In the United States the majority of beets are grown in the Northern Midwest or Northeastern states but other countries with high amounts of beet cultivation include Germany, Turkey, Russia, and France. Beets store well in refrigerator crisper drawers, and also are great for preserving and pickling, so can be enjoyed throughout the year.

Beetroots pack a nutrition punch and are high in fiber and mineral such as folate and manganese. The leaves of bets, or “beet greens,” are also popular (primarily outside the United States) and are high in many vitamins and minerals, including vitamin A, vitamin C, vitamin K, and iron.

The great news about table beets (the beets sold to be eaten whole) is that organic cultivation is common. Because beets are grown in temperate climates in many areas of the world and especially the United States, many regions are likely to have beets grown locally. Another great beet sustainability hack is the fact that beet leaves are also edible. Root to tip eating at its best!

However there is one caveat about beets – the majority of worldwide beet cultivation is for sugar beets, which are grown and boiled down to table sugar. According to the United States Department of Agriculture, the major (55%) of table sugar production comes from sugar beets and 95% of sugar beets are genetically modified varieties. Reducing your use of added table sugar and sourcing from GMO-free and organic sugar beets farms can help combat the issue. 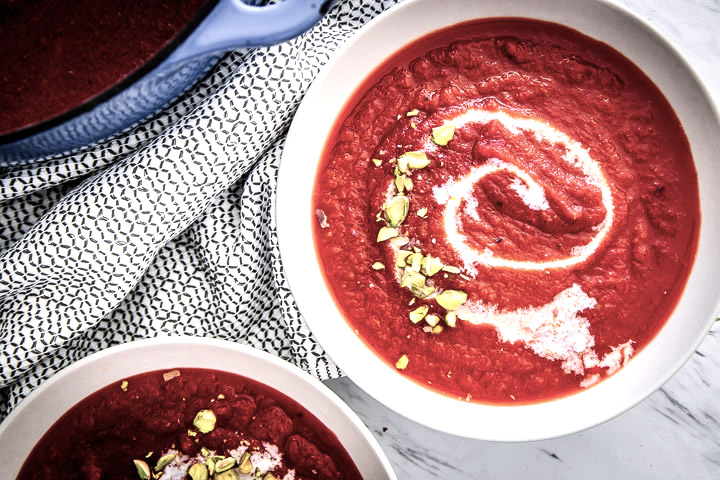 This Red Beet Apple Soup is an easy, cozy, comfort food recipe for fall and early winter. Beets can be intimidating to cook at first but a few easy tricks and tools will make this soup a staple on your November and December menus. 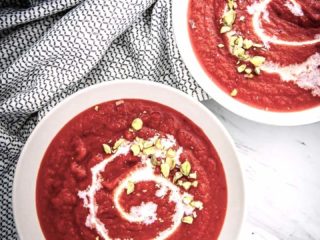 Leftovers & Storage: In my opinion soups are always better over time. This soup can be refrigerated for 5-6 days and will only get better with time. It can also be frozen and eaten throughout the cold weather season. 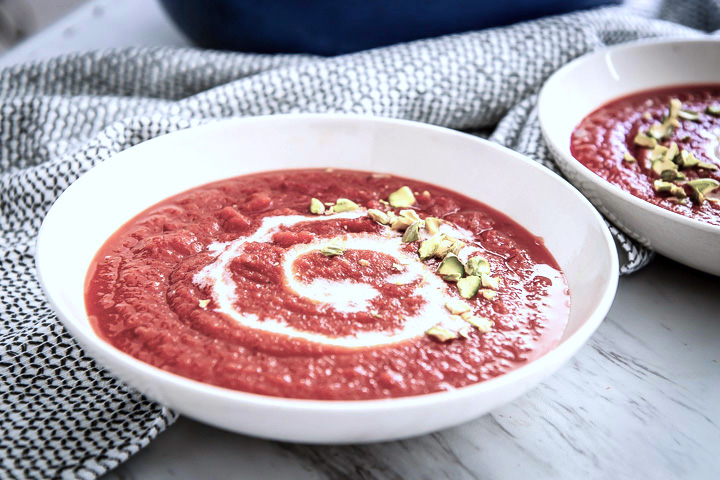 I hope you enjoy this sweet and savory Red Beet Apple Soup recipe, it’s the perfect cozy meal for cold weather night. Do you have a favorite beet soup recipe? Leave me a link below!