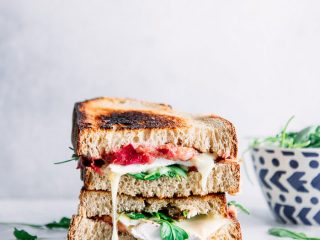 Rhubarb, the sour vegetable most commonly found in tarts and sweets. But let’s just describe rhubarb for what it really is: sour red celery.

It’s rare to find a rhubarb recipe that doesn’t include it’s usual partner in crime, the strawberry. Rhubarb and strawberries go together like peas and carrots; the sour and slightly bitter taste of rhubarb blends well with the ultra sweet taste of strawberries.

But what about the rhubarb on it’s own? Doesn’t the sour red stalk deserve it’s time to shine?

All about rhubarb: When to buy and how to cook

Though rhubarb is most often served  in sweet dishes it is actually a vegetable and is in season in late spring and early summer (October and November in the southern hemisphere).

Rhubarb’s celery-like stalks are the edible portion, which are often used in traditional cuisines around the world. But don’t eat the leaves! Rhubarb plant leaves are highly poisonous and can cause serious health problem. But the stalks? Go for it!

Rhubarb is most often sliced and roasted in the oven, but can also be stewed or sautéed. The plant has high water density, which means it will release water when heat. For this reason it becomes mushy and spreadable when cooked, which means it’s best mixed with other ingredients or used as a spread.

And that’s exactly how I let rhubarb shine in this Roasted Rhubarb Brie Sandwich!

Fun fact: Rhubarb stalks are eaten raw dipped in sugar in Norway and Sweden and dipped in chili and sweet spices in parts of South America.

The beautiful marriage between the rhubarb and brie in this Roasted Rhubarb Brie Sandwich is the blend of melted cheese and spreadable rhubarb. The spice of crispy arugula and a sweet addition like fig jam or plum preserves round out the flavor profile of this dish.

First, start by slicing up the rhubarb stalks and roasting them in an oven until they begin to soften, about twenty minutes. Then mix the rhubarb pulp with a bit of honey to cut the tartness of the stalk.

Then spread the rhubarb onto a piece of toasted bread, top with brie, add arugula and fig jam, and heat in a cast iron skillet. You’ll know it’s done when the bread begins to brown and the brie starts to melt. Ooey gooey brie cheese and tart rhubarb? Match made in heaven!

I promise you this will be the most sophisticated grilled cheese you will ever make. But be warned: this is not a sandwich for those who do not enjoy bold flavors!

Are you loving this rhubarb and brie grilled cheese sandwich recipe? Try another of our summer fun recipes like this Black Cherry Basil Ricotta Toast and this Summer Peach Panzanella Salad. Hot weather favorites!

Did you make this Roasted Rhubarb Brie Sandwich? Leave a comment and recipe rating to let us know what you think. Save to your favorite sandwich Pinterest board to keep for later and tag me on Instagram so I can see your sandwich creations!