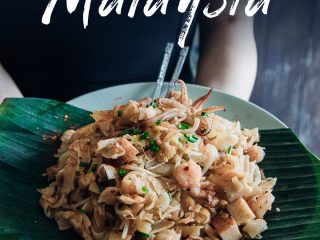 I met Shiryi Tay when studying to become a dietitian in San Francisco many years ago. We had classes together every week, volunteered at a local veteran’s hospital, and bonded over delicious food and our shared cat lady status.

Shiryi was born in Petaling Jaya, a city in the Malaysian state of Selangor, which is 20 minutes outside of Kuala Lumpur. Shiryi came to the United States at the age of 14 with her younger brother and to say she had culture shock was an understatement. But after spending her formative years growing up in the melting pots of Honolulu and San Francisco, she’s found her cultural identity in a blend of east and west.

And nothing exhibits that better than her love of food.

You spent most of your childhood in Malaysia but moved to Hawaii at the age of 14. How was that transition as a teenager? Did you like or hate the food when you got there?

It was very hard because at the time my English was pretty bad. I had taken English classes but it was an entirely new ballgame when I landed in Hawaii. In Malaysia the most commonly spoken language in school is Malay, however I also speak Cantonese, Mandarin, and Hokkien.

When I came to Hawaii I was surprised by the serving sizes of the food, there was so much food on my plate that I wanted to pack my school lunch to go! Also, the first day of school in the United States I not only already felt like an outsider but they served sloppy joes for lunch and I refused to eat it–it did not look appetizing to me. I still hate sloppy joes.

Don’t worry, I hate them too. When you moved to the US you came at the age of 14 with your 10 year old brother…without any adults. How did you learn to cook?

I didn’t cook much when I lived in Malaysia but I was forced to learn when I moved to Hawaii. It was a huge learning curve but with the help of YouTube I was able to pull together meals for us to get us by. I would go to the grocery store and buy whatever I saw and tried to cook it. Definitely trial by fire (but thankfully there weren’t any real fires).

How did you decide you wanted to study food and nutrition?

When I was in school in Hawaii I had someone approach me about taking a supplement. At the time I knew nothing about nutrition, but I knew knew enough to know that this person slinging supplements probably wasn’t the best source of nutrition information. It all sounded too good to be true.

This led me to become more interested in food and nutrition. Malaysian culture is food focused–the celebrations, the gatherings, everything we do is about food. I think this is a positive thing, but obesity and diabetes are also common. I wanted to study food and health to help my family live long and healthy lives, so I moved to San Francisco to study nutrition.

Malaysian culture is food focused — the celebrations, the gatherings, everything we do is about food.

How have you blended your Malaysian food roots with American culture?

A lot of times I miss the food and ingredients found in Malaysian food culture so when I’m cooking in the United States I will substitute with what is available here. And sometimes these new experiments end up being delicious!

It helps that San Francisco is diverse with different cultures, so I’m able to try new foods that I would never have eaten in Malaysia. So not only am I blending my Malaysian roots with American culture, but I’m also taking from other cultures a as well. It’s a melting pot!

Other than sloppy joes, what are some American foods that you now can’t live without?

You want me to be honest? Fried chicken and waffles. I would have NEVER eaten that combination in my life, but it’s SO good.

Tell us a bit about Malaysian food culture and how it is so unique.

I love (and miss) spicy! Malaysians love spice, be prepared to sweat when you eat Malaysian food. What I love the most about Malaysian food culture is that it’s a blend of so many other cultures. You have the traditional native culture that is a blend of Chinese and Malay people, also known as nyonya. Malaysia also has a strong Indian culture, as well as many Western influences because of British colonization. So it’s possible to eat from each culture in one sitting.

What are some of your favorite Malaysian dishes and ingredient combinations?

Some of my favorite dishes are nyonya kuih (dessert), roti of any kind (we serve roti with everything), and durian and other tropical fruits. My favorite is Pakistan mango, which is only available in Asia.

Street food is huge in Malaysia. Tell us a bit about the most popular street dishes.

Char kuay teow is very popular in Kuala Lumpur. The national dish is nasi lemak, a combination plate of curry, sambal, egg, and cucumber with rice. And roti is also super popular at street carts.

What should travelers know when going to food carts in Malaysia?

My advice for tourists who want to eat at Malaysian street carts and hawker halls is to scope out what other people are eating before you decide which stall to visit. And I always check out how clean the stall is before deciding if I want to eat there.

Also, bring your own napkins! They don’t provide them for you.

Travel tip: Bring your own napkins to Malaysian food carts or end with sticky fingers.

If someone wanted to explore Malaysian food culture, which dish would you choose and why?

Definitely char kuay teow. It’s a delicious blend of stir fried noodles, fish cakes, and seafood in a rich and spicy sauce. It’s a simple yet flavorful example of Malaysian cuisine and a great dish for a first-time Malaysian food experimenter.

Thanks to Shiryi for sharing her story (and her delicious recipes)!

Know someone (maybe even you?) who would be a great Eco-Hero interview? Leave a comment below or contact me to suggest future Eco-Hero features.

100shares
Previous Post: « 5 Foodie Things to Do in Duluth, Georgia
Next Post: How to Make Homemade Boozy Blackberry Lemonade »